My family and I set out to climb a mountain last weekend.

Let’s just say that the idea of making it to the summit of a Highland munro was more glorious than the reality of actually doing it. Images of the Von Trapp family cresting a grassy, Alpine peak to soaring strains of “Climb Every Mountain” came back to mock me as we slogged across the prerequisite boggy plain. At times our lofty goal was reduced to simply trying to take the next few steps without being sucked down in the mud. And that beautiful vertical ascent I had imagined involved a lot more back-and-forth trudging (to the tune of whining children) than climbing from glory to glory. Despite our burning lungs and quivering calves, the top of the mountain seemed to loom even farther overhead than when we had started. In frustration, my youngest child finally expressed what I was feeling:

“Why are we even doing this?”

If I’m brutally honest, I have to admit that permutations of this question have risen in my mind at different times during my long walk of faith. And I witness the same deep disillusionment in other discouraged believers, trying to find a positive spin on why their lives and ministries have not turned out as they had expected .

We set out with glorious expectations of victorious living and mountaintop experiences with God. We are fortified with stories of great heroes of the faith who seemed to effortlessly leap over challenge after challenge, buoyed up by their overcoming faith. And yet when we get hit in the face by crisis after crisis, or bogged down by the life-sucking sludge of everyday struggle, we are tempted to lose heart.

Remember those earlier days after you had received the light, when you stood your ground in a great contest in the face of suffering. Sometimes you were publicly exposed to insult and persecution; at other times you stood side by side with those who were so treated. You sympathized with those in prison and joyfully accepted the confiscation of your property, because you knew that you yourselves had better and lasting possessions.
Hebrews 10:32-34

We begin to wonder why we work so hard to accomplish so little, why one hard-won step forward inevitably results in a downhill slide back. Doesn’t God want us to make it to the top? Why does the path have to be so steep, our struggle to climb it so constant? In the face of so many insurmountable odds, we are sorely tempted to sit down and settle for spiritual mediocrity.

Why are we even doing this?

So do not throw away your confidence; it will be richly rewarded. You need to persevere so that when you have done the will of God, you will receive what he has promised. For in just a very little while, “He who is coming will come and will not delay. But my righteous one will live by faith. And if he shrinks back, I will not be pleased with him.”
Hebrews 10:35-38

No one forced us to choose this difficult path of faith, and no one is forcing us to keep moving forward in ministry. We chose it because we believe in the One who called us. Yes, we believe in the miserable outcome for those who do not respond to Him in obedient faith. But it’s not really fear of hell that motivates us. It is love for God, and an overwhelming desire to see that look of delight on His face when we finally crest the last summit.

He regarded disgrace for the sake of Christ as of greater value than the treasures of Egypt, because he was looking ahead to his reward. By faith he left Egypt, not fearing the king’s anger; he persevered because he saw him who is invisible.
Hebrews 10:39, 11:26-27

The truth is that we really are members of that great cloud of witnesses, ones whose very transformed nature it is to keep going despite ourselves. They kept going not because it was somehow easier for them to keep believing or because the trials they faced were any less daunting, but because their deeper longing for God won out over their immediate desire for comfort and security.

All these people were still living by faith when they died. They did not receive the things promised; they only saw them and welcomed them from a distance. And they admitted that they were aliens and strangers on earth. …If they had been thinking of the country they had left, they would have had opportunity to return. Instead, they were longing for a better country–a heavenly one. Therefore God is not ashamed to be called their God, for he has prepared a city for them.
Hebrews 11:13-16

When I look for what earned these “faith hall of famers” a spot on the list, I don’t find major accomplishments or grand success stories. In fact, most of them died long before they reached the top. Abel got killed; Enoch simply kept walking. Noah got up each day and added a few more planks to the most futile project anyone could imagine. Abraham meandered as a refugee in a land he would never own; and Moses died gazing at it from a distance.

They went about in sheepskins and goatskins, destitute, persecuted and mistreated–the world was not worthy of them. They wandered in deserts and mountains, and in caves and holes in the ground. These were all commended for their faith, yet none of them received what had been promised.
Hebrews 11:37-39

What set these men and women apart were not their heroic feats of faith but rather their unsung refusal to quit. By any human standard, they lived their lives as losers, people who had very little to show for all they had invested. And yet they looked to God for their stamp of approval. And He deemed them worthy. In fact, He is proud to be called their God.

God had planned something better for us so that only together with us would they be made perfect.

Therefore, since we are surrounded by such a great cloud of witnesses, …let us run with perseverance the race marked out for us. Let us fix our eyes on Jesus, the author and perfecter of our faith, who for the joy set before him endured the cross, scorning its shame, and sat down at the right hand of the throne of God. Consider him who endured such opposition from sinful men, so that you will not grow weary and lose heart.
Hebrews 11:40-12:3

The same Spirit that kept these saints of old going is now at work in us, prodding us to keep putting one wobbly foot in front of the other. They cheer us on as we finish what they started. Yes, the slog is slow and mucky, but it is taking us somewhere. Our victory is not in how quickly or easily we make the summit, but in how faithful we are to take each inglorious step along the way.

Why are we even doing this?

For the joy set before us. 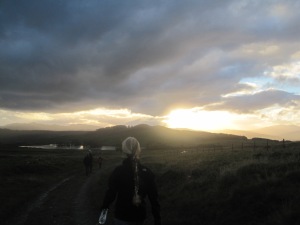