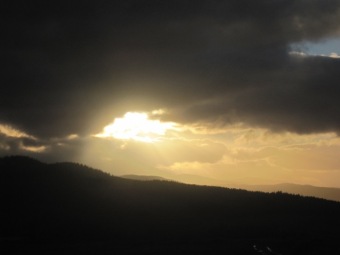 What does it mean for me to be a priest? Obviously some people are called into a specific type of priestly ministry, involving specialized training, recognition, and a particular leadership role within the church. But what about the rest of us? If a core part of our identity as believers is to be part of a priesthood, what does that actually look like?

Embracing our identity as priests should radically shape the way we go about our lives. Studying the Reformation with my children in our recent history classes has reminded me how life altering this doctrine was for the believers of that era. In a post-medieval context, it infused common people with a new boldness to approach God directly and to study the Scriptures personally. But how does this doctrine speak into an individualistic era in which we are more likely to think of our relationship with God as a personal matter and relegate our spirituality to what we experience in our private time with Him?

Then Moses went up to God, and the LORD called to him from the mountain and said, “This is what you are to say to the descendants of Jacob …
Now if you obey me fully and keep my covenant, then out of all nations you will be my treasured possession. Although the whole earth is mine, you will be for me a kingdom of priests and a holy nation.’
Exodus 19:3-6

Like us, Moses had a long way to go in figuring out how to do this whole priest thing. He, like his ancestor Abraham, had been chosen as God’s representative on earth. But what started out as the not-so-simple task of confronting a powerful government and rescuing a group of slaves quickly turned into an even more complicated task of leading an unruly nation through its unpredictable adolescence and into its high calling of being a kingdom of priests. For starters, Moses needed a little training himself.

Listen now to me and I will give you some advice, and may God be with you. You must be the people’s representative before God and bring their disputes to him. Teach them his decrees and instructions, and show them the way they are to live and how they are to behave.
Exodus 18:19-20

Thankfully God sent along his father-in-law, a veteran priest from Midian (and a fellow descendent from Abraham). In addition to his invaluable advice about empowering those under him to lead, Jethro also charged Moses with the dual responsibility of taking the people’s concerns before God and of speaking God’s concerns to the people. More than that, he called Moses to live before the people in such a way that they could see what it looked like to be a priest in service to God and imitate his example. Jethro himself led by example, blessing Moses and ushering him, Aaron, and all the elders of Israel into communion with God through a sacrificial feast.

When Moses went and told the people all the LORD’s words and laws, they responded with one voice, “Everything the LORD has said we will do.” … He got up early the next morning and built an altar at the foot of the mountain and set up twelve stone pillars representing the twelve tribes of Israel. Then he sent young Israelite men, and they offered burnt offerings and sacrificed young bulls as fellowship offerings to the LORD. …

Moses then took the blood, sprinkled it on the people and said, “This is the blood of the covenant that the LORD has made with you in accordance with all these words.”
Exodus 24:3-8

Moses faced a steep learning curve as he was almost immediately called on by God to lead his people in a similar encounter. God was going to show up on a nearby mountain in His overwhelming power and glory. This was no small deal. It was God once again descending to inhabit a physical space on earth and to meet with His people. The first try at this on the mount of Eden had ended in disaster when the people-priests violated the terms of their employment and desecrated themselves with restricted food. This time around they would need to be more careful.

Moses went to great lengths to prepare his community for the day of God’s coming, telling them God’s words and ways, calling them to respond in obedience and faith, offering sacrifices of prayer and praise on their behalf, and teaching them to do the same. Using the same words our great High Priest would later speak as He introduced yet another communion feast, Moses applied the blood of God’s covenant to their physical bodies.

Moses and Aaron, Nadab and Abihu, and the seventy elders of Israel went up and saw the God of Israel. Under his feet was something like a pavement made of lapis lazuli, as bright blue as the sky. But God did not raise his hand against these leaders of the Israelites; they saw God, and they ate and drank.
Exodus 24:9-11

And amazingly, the same holy God who had traumatized them with His life-threatening thunderclouds and earth-shattering voice now invited Moses and his companions to come to His place for dinner. Just as a select few of Jesus’ disciples would later get a mountaintop glimpse of His glory, God gave these mortals the opportunity to gaze on His beauty. Feet planted on earth and eyes gazing into heaven, they ate and drank with God.

The intimacy of this absolutely floors me! And yet this is the very sort of communion that we get to share with God each time we break bread and drink wine together in His presence. Not only do we eat and drink with God at the Eucharistic altar, we also dine with Him each time we invoke His blessing on our meal and receive our daily manna with thanks. In a very real sense, when we pray over our food we are functioning as priests.

And just as communion is by nature a communal act, our priestly calling is anything but something to be limited to our private lives. We are those whom God has called into relationship with Himself so that we might represent Him to others and others to Him. His blessing on those around us is mediated by our faithfulness to intercede on their behalf before His throne and to speak on His behalf into their lives.

As we consciously live and serve in the presence of God, we become the bridge between heaven and earth, between God and man. That is what it means to be a priesthood of believers. 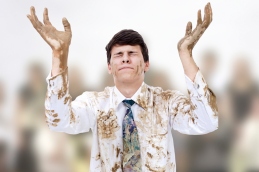 Some call it the “Imposter Syndrome.” My kids like to call it “being scrappers.” But when many of us peel back the thin veneer that covers our truest selves, we admit that we feel incompetent, inadequate, and in constant danger of being found out.

Every time I read Zechariah’s vision of Joshua the high priest caught in dirty robes, I think of my most common nightmare. Inevitably I am caught in some publicly humiliating situation, exposed for not having completed an assignment or not yet presentably dressed and scrambling for cover.

Then he showed me Joshua the high priest standing before the angel of the LORD, and Satan standing at his right side to accuse him.
Zechariah 3:1

In Joshua’s case, an accuser comes along to make matters worse. He was already plenty aware of his own disqualifying state: high priests can’t wear dirty clothes! They have to be holy and pure to serve in God’s presence. But the shame of someone else pointing out his disgraceful predicament to a majestic magistrate was unbearable.

Joshua, like us, was a second-stringer. By birth he was a priest, set aside for service to God. And by anointing he was a high priest, entrusted with the responsibility of representing his people to God and of purifying his people on behalf of God. But he lacked the resources to go with his lofty position. He was just getting back into the game after a devastating destruction and a lengthy exile. There was no temple to work in, no vessels with which to properly do the job, and even his professional uniform was unacceptably soiled.

“Listen, O high priest Joshua and your associates seated before you, who are men symbolic of things to come: I am going to bring my servant, the Branch. See, the stone I have set in front of Joshua! …and I will remove the sin of this land in a single day.”
Zechariah 3:8-9

But the Joshua in this vision is more than just a post-exilic priest coming from behind. He is also the great High Priest who was still to come. His tainted clothes and the shame they brought on Him would enable Him to identify with those He came to represent. He would hear the voice of the accuser whispering in His ear that He was unworthy, disqualified from the running because of His tainted condition. And in one sense, the allegations would be true.

The LORD said to Satan, “The LORD rebuke you, Satan! The LORD, who has chosen Jerusalem, rebuke you! Is not this man a burning stick snatched from the fire?”
Zechariah 3:2

And yet God’s response to Joshua the priest, Jeshua the Messiah, and us, their companion second-stringers, is the same. He sends His angel to rebuke the accuser. We are His chosen ones. He loved us enough to snatch us from the fire; the disgraceful smut that clings to us in the aftermath of our rescue does not disqualify us from His ongoing care.

Now Joshua was dressed in filthy clothes as he stood before the angel. The angel said to those who were standing before him, “Take off his filthy clothes.” Then he said to Joshua, “See, I have taken away your sin, and I will put rich garments on you.”

Yes, we stand before Him in filthy rags. But as the angelic arbiter did for Him, our High Priest now does for us. He strips us of our disqualifying preconditions. He does not deny the reality of our shame or cover over its cause. Instead gets His own hands dirty stripping us down and washing us off. And having cleansed us from all unrighteousness, He re-dresses us in the attire appropriate to our exalted calling.

We are no more imposters than either Joshua was. Yes, there is plenty of smut that could be dug up on any one of us (and most likely will be). But when the accuser stands to make his case against us, he is the one that gets rebuked. Our High Priest’s story sets a precedent that alleviates our fear of being caught out.

The angel of the LORD gave this charge to Joshua: “This is what the LORD Almighty says: ‘If you will walk in my ways and keep my requirements, then you will govern my house and have charge of my courts, and I will give you a place among these standing here.
Zechariah 3:6-7

He already knows our baggage. There is nothing new He will discover about us that suddenly disqualifies us from the running. Rather, He is in the process of remaking our image, both inside and out. His love is the precondition for our acceptance.

God is in the business of calling second stringers and qualifying us to serve in His courts. He is the sort of God who sides with the underdog and roots for the rejects. As we enter His presence dirty and ragged, we re-enact the experience of the exiles, feeling their need for a Messiah.

Our “imposter” rags prepare the way of the Lord. They make room in our hearts to receive His love.