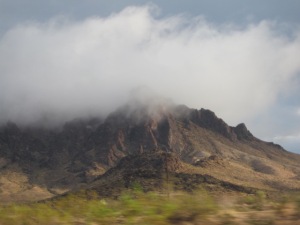 Living with an N.T. Wright student in a small university town, I am surrounded with discussions about temple language and imagery. Mountaintop meetings. Glory clouds. Cosmic elements. Sacred spaces. It seems my whole world is filled with words and symbols that point to God’s holy place.

And that’s just the point. It is.

The more I look around me, the more I have eyes to see that this world is in the process of becoming God’s temple.

Now the LORD God had planted a garden in the east, in Eden; and there he put the man he had formed. And the LORD God made all kinds of trees grow out of the ground–trees that were pleasing to the eye and good for food… A river watering the garden flowed from Eden; from there it was separated into four headwaters.
Genesis 2:8-10

In the beginning God planted a mountaintop garden, watering it with fresh water springs that then flowed downhill to the lands below. He made it a beautiful place where He would enjoy sharing life with the people He had created. And God made sure they had plenty of good food to enjoy while they hung out at His house.

OK, so that place didn’t last too long. But that doesn’t mean that God quit finding mountaintops where He could get together with His people. He communed with Noah on the top of Mount Ararat and with Moses on the top of Mount Sinai. He even invited the elders of Israel up for a mountaintop feast there, eating and drinking with them as guests in His house.

In the year that King Uzziah died, I saw the Lord seated on a throne, high and exalted, and the train of his robe filled the temple. Above him were seraphs, each with six wings… And they were calling to one another: “Holy, holy, holy is the LORD Almighty; the whole earth is full of his glory.” At the sound of their voices the doorposts and thresholds shook and the temple was filled with smoke.
Isaiah 6:1-4

Though He didn’t need anyone to build a permanent structure for Him, God eventually allowed Solomon to build Him a palace on top of Mount Zion. Golden beams. Blue curtains. Glassy sea. Everything about this place was designed to match His heavenly house, with one exception. People could dwell there, too. And they did. Priests bustled about cooking up offerings day and night. People came and went, eating and drinking with God and chatting with Him about their failures and their needs, their past and their dreams.

When Solomon finished praying, fire came down from heaven and consumed the burnt offering and the sacrifices, and the glory of the LORD filled the temple. …When all the Israelites saw the fire coming down and the glory of the LORD above the temple, they knelt on the pavement with their faces to the ground, and they worshiped and gave thanks to the LORD.
2 Chronicles 7:1-3

They never had to wonder if God was in His house. The same massive, fiery cloud that they had witnessed descending on Mt. Sinai had also come down to fill the Jerusalem temple at its inauguration. That glory cloud now stayed slightly hidden behind a curtain in God’s private chamber within His house, but everyone knew it was there. And once a year, a priest had the terrifying privilege of going in to the Holy of Holies to see it.

But even that impressive structure was temporary. It went through several cycles of decline and renovation, death and resurrection. By the time Jesus showed up at the temple, God’s glory cloud had moved out and had stayed away for several centuries. But that didn’t bother Jesus. He knew it was time for God to come down off His mountain and claim more real estate on the earth.

After six days Jesus took with him Peter, James and John the brother of James, and led them up a high mountain by themselves. There he was transfigured before them. His face shone like the sun, and his clothes became as white as the light…. While he was still speaking, a bright cloud enveloped them, and a voice from the cloud said, “This is my Son, whom I love; with him I am well pleased. Listen to him!”
Matthew 17:1-5

In His days on earth Jesus still preferred camping out in mountain gardens, especially when He felt the need to be closer to His heavenly home. The Mount of Olives. The Garden of Gethsemane. He also invited thousands of people to sit and eat with Him on the mountainsides. And He let His disciples see God’s glory cloud descend on Him on a mountaintop. They recognized the significance of what they were seeing—the glory cloud entering a Temple–and immediately wanted to build something to capture it there.

But that wasn’t the point. Jesus’ body was only an interim temple, one which was about to be destroyed and rebuilt in a totally new form. He tried to explain this as they ate and drank together the night before His death. His bodily temple would be broken, suspended between heaven and earth on a barren hilltop outside Jerusalem.

For the earth will be filled with the knowledge of the glory of the LORD, as the waters cover the sea. –Habakkuk 2:14

God was in the process of building a new temple, one which would fill the whole earth with His glory.

Suddenly a sound like the blowing of a violent wind came from heaven and filled the whole house where they were sitting. They saw what seemed to be tongues of fire that separated and came to rest on each of them.
Acts 2:2-3

And it has. Those life-giving streams reach me each time I eat the bread and drink the cup. That glory cloud has descended to fill my fleshy temple, God’s Spirit alighting on me in an invisible flame that transforms my lowly body into His holy dwelling.

As you come to him, the living Stone–rejected by men but chosen by God and precious to him– you also, like living stones, are being built into a spiritual house to be a holy priesthood, offering spiritual sacrifices acceptable to God through Jesus Christ.

In him the whole building is joined together and rises to become a holy temple in the Lord. And in him you too are being built together to become a dwelling in which God lives by his Spirit.
1 Peter 2:4-5; Ephesians 2:21-22

But God doesn’t stop there, either. He has made me a part of a holy nation, a royal priesthood of believers from every tribe, tongue and nation. We are the Church, the massive, worldwide temple that God is building out of living stones. This sacred dwelling spans time and space, growing into a structure that will eventually fill both heaven and earth. God’s new temple is loftier than the heavens, and at the same time it is grounded in my daily reality.

Whoa. It is inescapable, and I love it.

The earth is as full of the presence of God as the sea is of water. Each cloud in the sky is a reminder of His presence. Each meal we eat is an act of communion. Each step I take is on holy ground.

God’s dwelling place has spread from the lofty mountaintop to my little town by the sea.

—
How lovely is your dwelling place, O Yahweh Almighty!
Psalm 84:1

5 thoughts on “From the Mountain to the Sea”

Tell me about it... Cancel reply